Punta Arenas is a magical town.  It has a lot of history with it’s battles, unsolved mysterious, stories of warlocks, and even home to many ghosts.  Out trip here started with a full day to explore, so we headed on a very long walk away from the town to the Magallanas Forest Reserve. 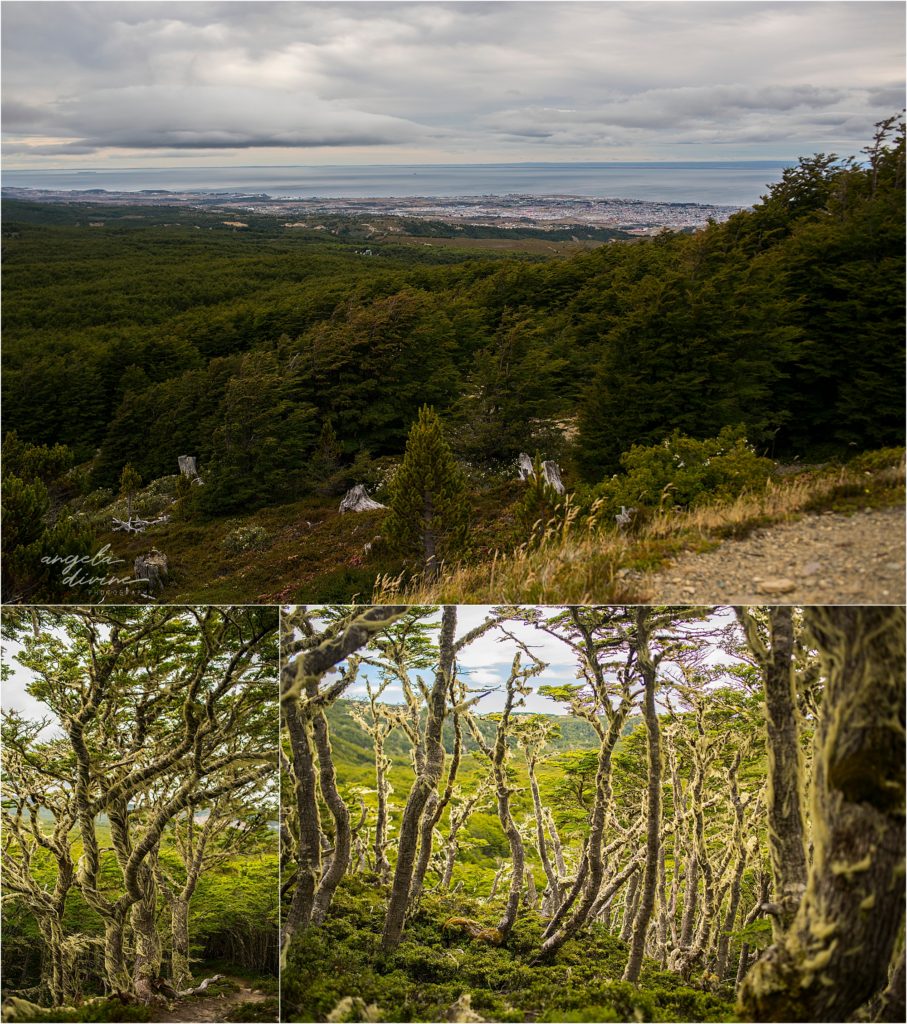 Since we had no car, we decided to walk 2 hours up the highway to the entrance point.  Luckily, a nice woman who spoke english saw us walking and offered us a ride to the top.  Once we arrived, the ranger gave us a map and we decided to hike the four hour loop trail. The forest was lush and felt enchanted.  The trees were something out of a Dr. Suess book.  We kept our eyes pealed for wild life, but didn’t see any.  We were practically alone most of the morning, but when the sun finally came out, the forest started to bustle with visitors.  We learned later on a tour that the forest we were in is full of ghosts.  During a prison outbreak hundreds of years ago, civilians took to hiding in the forest while the town was pillaged and burnt to the ground.  Another time, the governor in charge hid in the forest because he was being over thrown.  Finally, there’s the story of treasure being hidden in the forest.  So who knows who was watching us hike….

We finished our hike and made it back down to the coast- a total of 22 kilometers and were toasted.  We made it back to our place, cooked some yummy food until sunset.  Tom booked a murder mystery ghost walking tour of Punta Arenas- and WOW!  If you ever go to this city- please check this out!  It was one of the coolest/most fun things we did while on our trip! The next morning, we were up for sunrise for our PENGUIN TOUR!  Seeing the penguins was one of the main reasons we decided to spend some time in Punta Arenas, so we were jazzed!  There are many different tours you can do, but we opted for a half day one to Isla Magdalena.  The morning tours are better because if the waves are too choppy, you won’t be able to get off the boat and onto the island to see them. 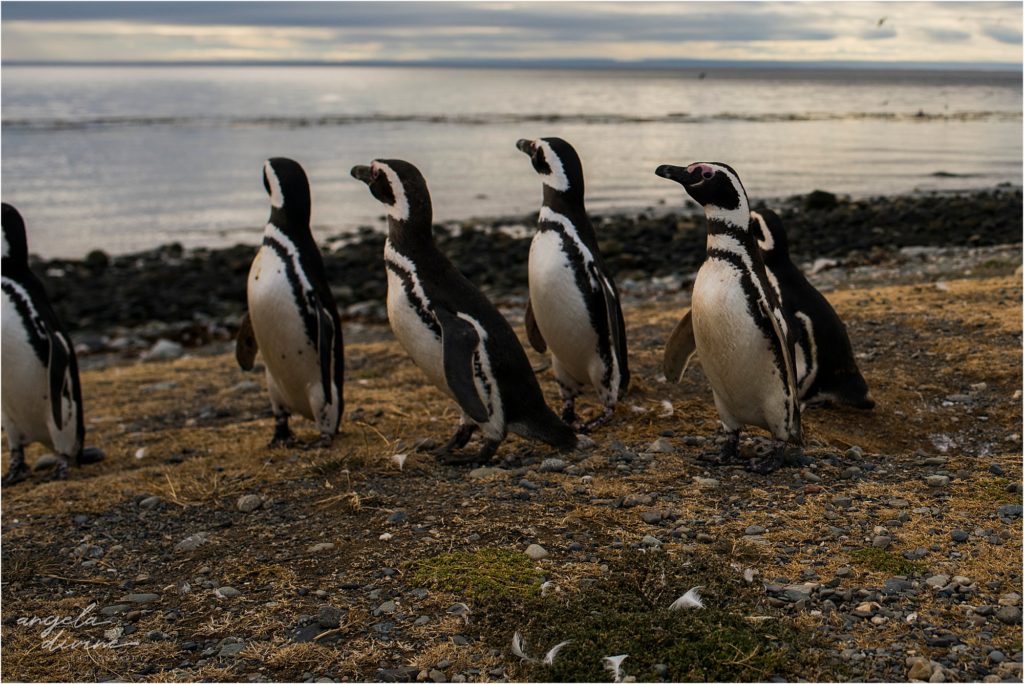 We boarded a nice boat that served us coffee and tea.  It took about an hour to get to the island, on the way there, a whale popped his head above the sea.  Once we arrived, we were able to get off the boat and see thousands of penguins!   We were instructed not to touch the penguins or get too close to them.  Isla Magdalena is now a national monument where boats dock daily to let people see these adoraable penguins do penguin things.

The Magallenic penguins are about three feet tall and had just had babies!  The babies were very furry, and were rapidly growing.  It only takes two months for them to be as big as their parents.  This bread of penguins also burrows and the mates live in holes.

Most tours give you an hour on the island to take photos, walk around, and enjoy penguin life.  They don’t love people, or at least that is the vibe I got from the adventure.  We were more or less in their way.  It was so fun to see them in their natural habitat. 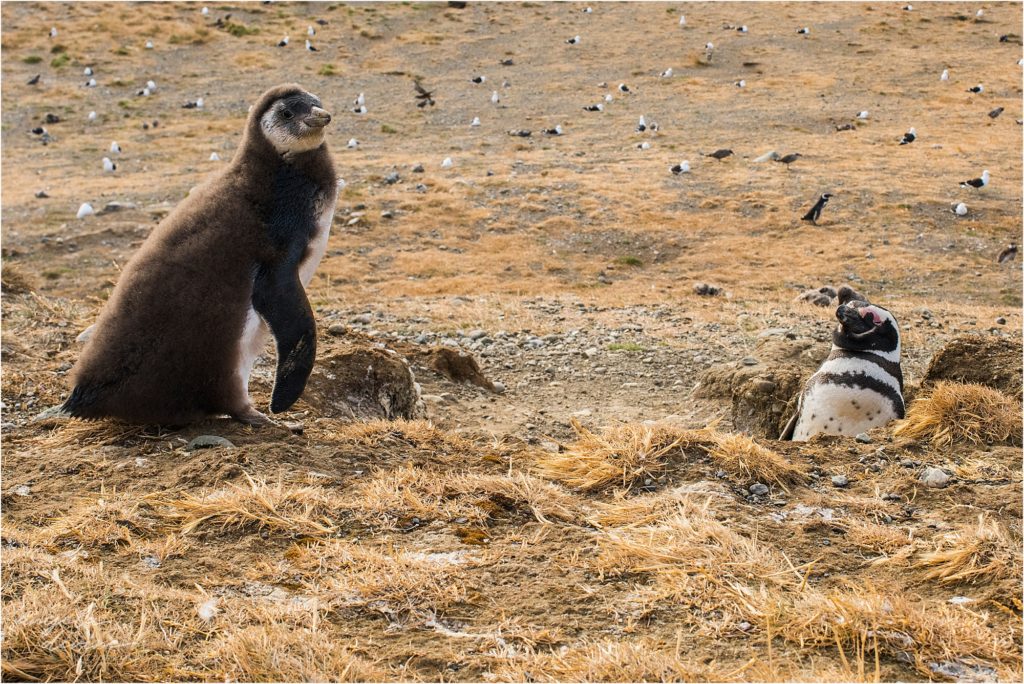 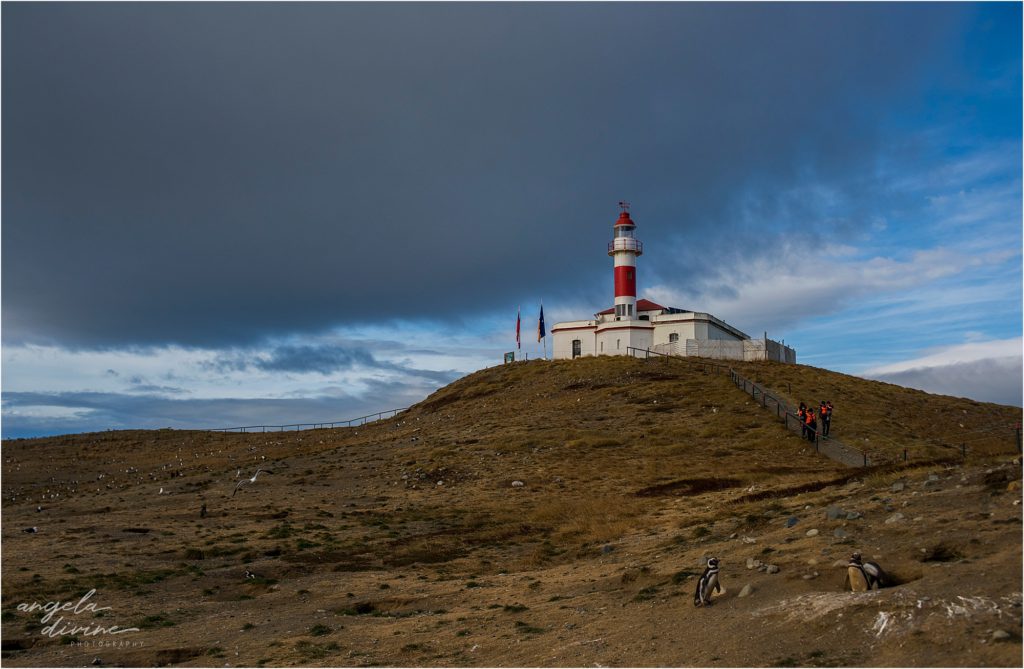 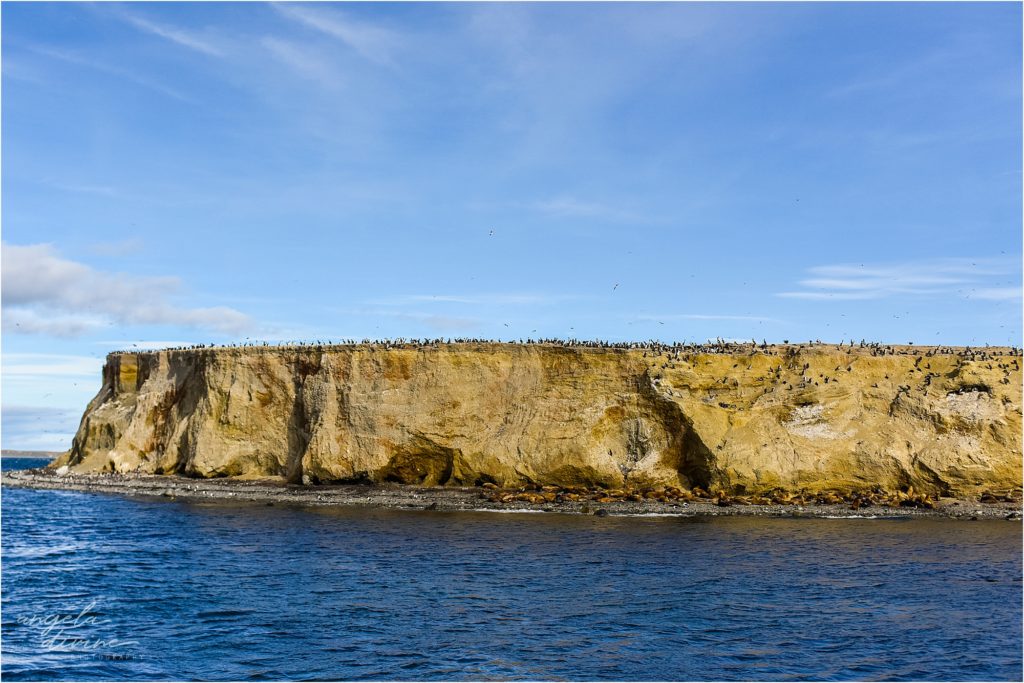 Our final day in Punta Arenas, we walked around town.  We saw many museums as well as the historic cemetery with a very special gate.  This gate was created by Sara Braun who was a very powerful woman in the history of Punta Arenas.  She helped woman gain rights and didn’t take crap from anyone.  Before she died, she told them to seal the gates of her tomb.  If anyone ever opened them, she would rise up and haunt Punta Arenas forever.  Needless to say, the gates are still sealed.

Speaking of ghosts, we also stopped at a very haunted museum our tour guide told us about the day before.  The Palace Regional Magallanes  is beautiful.  It’s literally a peak into a very wealthy home where many of great kings and heroes visited when they came to Punta Arenas.  It is also known for several ghosts.

The first is one of the workers, a young girl, who lived in the basement.  The second is a man who often is found on the stair case upstairs (which visitors are now allowed to see) but who also loves the billiards room.  The museum has an alarm system that goes off almost every Thursday at 9pm.  The first time the police came, they loved the museum and instead of looking for what tripped the wire, spent a few hours just checkin out the exhibits.  When they were leaving, they closed everything up, then saw a light turn on and a man standing at the door staring them down.  The police won’t go back in.

I hope you enjoyed reading about Punta Arenas.  It’s a wonderful town with so much history and penguins!  It’s the most south we went on our trip in Patagonia, I highly recommend stopping here on your travels!